Flashback Weekend Chicago Horror Con and Dangerous Entertainment are proud to announce that legendary director Sam Raimi will be a very special guest at the Flashback Weekend Chicago Horror Con held August 2-4, 2019 at the Crowne Plaza Chicago O’Hare in Rosemont, IL. Sam Raimi is the groundbreaking and innovative director of the Evil Dead trilogy (“THE EVIL DEAD”, “EVIL DEAD 2: DEAD BY DAWN”, and “ARMY OF DARKNESS”), the original Spider-Man trilogy (“SPIDER-MAN” (2002), “SPIDER-MAN 2” (2004) and “SPIDER-MAN 3” (2007)), and many more classics including “DRAG ME TO HELL”, “A SIMPLE PLAN”, and “OZ THE GREAT AND POWERFUL”. In 2015 Sam Raimi also co-created and directed the pilot of the Starz series “ASH VS. EVIL DEAD”. As a producer, Mr. Raimi’s credits include the films “30 DAYS OF NIGHT”, “DON’T BREATHE”, “THE GRUDGE”, and the TV series “XENA: WARRIOR PRINCESS” and “HERCULES: THE LEGENDARY JOURNEYS”. 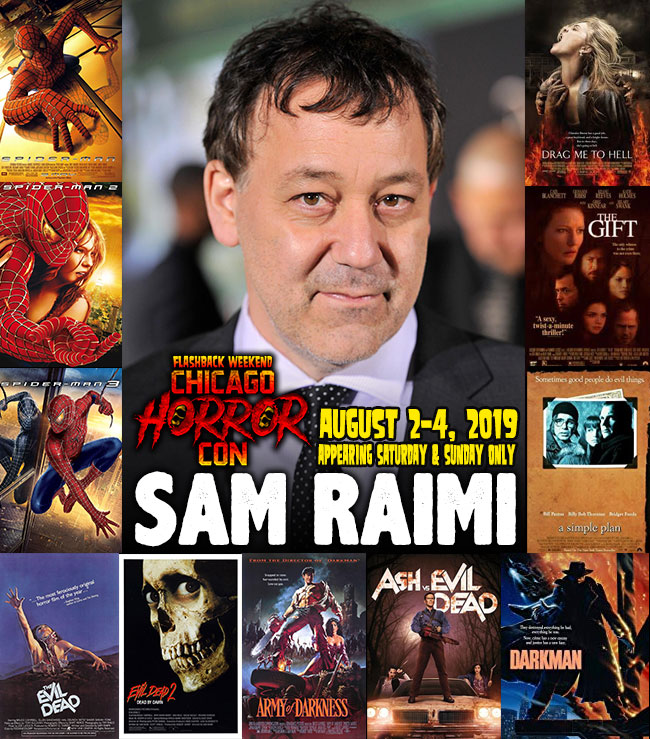