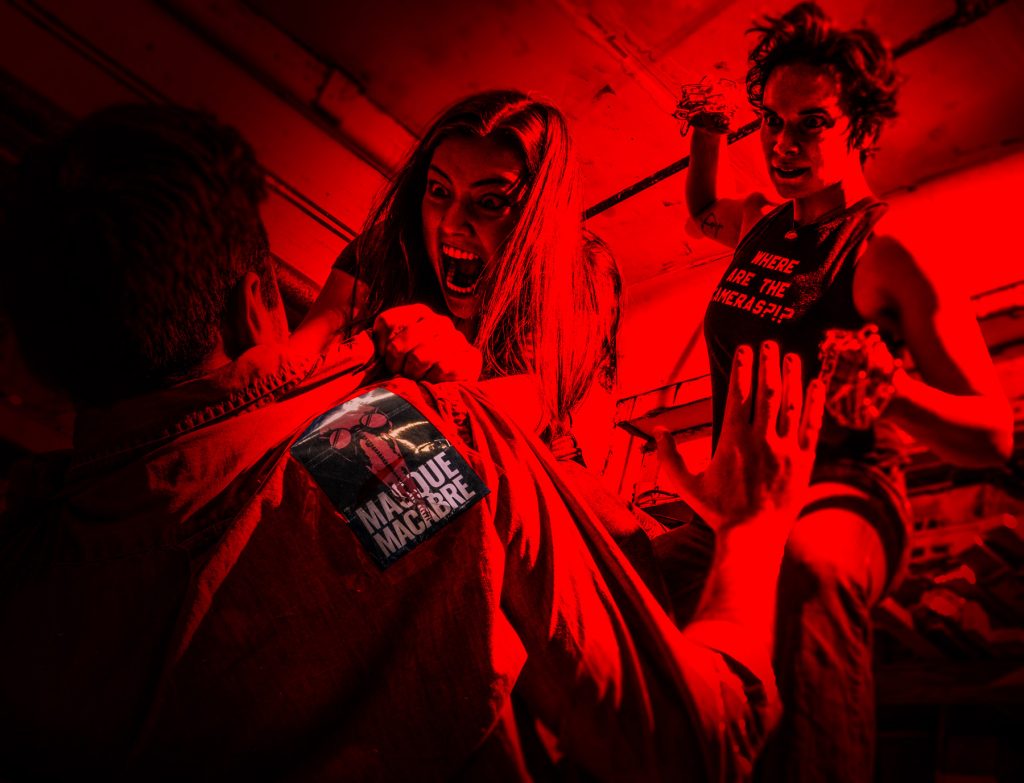 Inspired by the Stories of Edgar Allan Poe

CHICAGO (September 20, 2018) – Just in time for Halloween, Strawdog Theatre Company launches its 31st season with the world premiere of MASQUE MACABRE, a dark and bloody thrill ride inspired by the works of Edgar Allan Poe – think Carrie meets Eyes Wide Shut. The handlers of a “bad boy” entrepreneur go to extremes to give him one last big bash before his past catches up to him. An explorative immersive theatre experience a la Sleep No More, guests travel from room to room throughout the space and follow stories of revenge and murder as they play out in real time.

Comments Co-Artistic Director Michael Dailey, “MASQUE MACABRE is the most ambitious project in our 31 year history. We’re thrilled to share the immersive and horrifying world of MASQUE with Chicago audiences. With fourteen storylines playing out in real time throughout our entire space, you could see this show multiple times and come out with a totally different experience each time. At a haunting time of year, MASQUE delivers a modern nightmare that explores the line between revenge and justice and how what we do (or don’t do) makes us complicit in the evil and darkness of others. It may just keep you up at night.”

Inspired by the stories of: Edgar Allan Poe

Tickets: Previews $30. Regular run $50. Seniors: $40. Board Night: $75. Single tickets and season subscriptions are currently available at www.strawdog.org. Half price Rush and Student tickets available at every performance and other discounts available. Call (773) 644-1380 for details.

Aly Greaves Amidei (Co-Writer) has worked as a designer, playwright and maker based in Chicago for the last 18 years. She is an Assistant Professor of Costume Design at UNC-Charlotte. She is proud ensemble member of Strawdog Theatre Company and Lifeline Theatre. Her plays and audio dramas have been produced at Lifeline Theatre, WildClaw Theatre, Strawdog Hit Factory, College of DuPage and Cartage Theatre of Charlotte.

Cara Beth Heath (Co-Writer) has an MFA in Playwriting from Western Michigan University and a BA in Creative Writing from the College of Charleston. She is the Literary Manager at Strawdog Theatre Company. She’s also been invited to the John F. Kennedy Center for the Performing Arts for dramaturgy, directing and playwriting. Her work has been read and produced in several festivals and workshops across the Midwest, including her award-winning play Good Enough about the women of the Gibson guitar factory during WWII. She’s been in Chicago for a couple of years now, developing her plays and advocating for local playwrights.

John Henry Roberts (Co-Writer) joined the Strawdog ensemble in 2004. Previous writing credits include Strawdog’s production of The Sweeter Option and the Neo-Futurists’ production of True Dreams of Annie Arbor. Recent acting credits include Pillars of the Community, Barbecue and The Night Season (Strawdog), Neverwhere and Miss Holmes (Lifeline Theatre), The Little Flower of East Orange (Eclipse Theatre, Jeff Nomination for Outstanding Actor in a Lead Role), Diamond Dogs and The Hammer Trinity (The House Theatre). He’ll next appear in Twelfth Night at Writers Theatre. He is represented by Paonessa Talent.

Janet Howe (Co-Director) is a director, immersive theatre consultant and Co-Artistic Director of (re)discover theatre. Over the past four years, Janet’s work has focused exclusively on immersive and site-specific works. Janet directed and spearheaded projects such as FOR ONE: a series of plays built for an audience of one and Farewell My Friend, an immersive melding of Romeo & Juliet and Tristan & Iseult. Other directing credits include Lysistaratra, Fifty Shades of Shakespeare and Jason & (Medea). Starting October 2018, Janet will be studying immersive theatre at Middlesex University: London, focusing on accessibility in immersive forms. www.janetkhowe.com

Anderson Lawfer (Co-Director) is a Co-Artistic Director of Strawdog. He was the previous Artistic Director of Strawdog’s Hugen Hall and focused on new works, adapting and directing Pontypool, Fail/Safe and Kill Shakespeare. He is the creator and host of many Strawdog late night shows including Theatre Wars!, The Direct Off! and The Game Show Show and Stuff! He will also be directing a new musical in the spring written by Mark Guarino and Jon Langford called Take Me.

Eli Newell (Co-Director) Eli Newell is thrilled to return to Strawdog after having previously assistant directed Damascus. He is a Chicago-based director from the Twin Cities, Minnesota. In Chicago, Eli has assisted at Goodman Theatre, Northlight Theatre, Raven Theatre, Strawdog Theatre Company, Haven Theatre and Windy City Playhouse. In the Twin Cities, he has worked with Guthrie Theater, Children’s Theatre Company, Ordway Center and the Playwrights’ Center. Eli is a graduate of Northwestern University’s School of Communication.

Crystal Head Vodka is the official vodka of MASQUE MACABRE.

Since its founding in 1988, Strawdog Theatre Company has offered Chicagoland the premiere storefront theatre experience and garnered numerous Non-Equity Jeff Awards with its commitment to ensemble acting and an immersive design approach. The celebrated Company develops new work, re-imagines the classics, melds music with theatre, asks provocative questions and delivers their audience the unexpected.